Display All Posts About:

In 24 hours, I have fallen completely in love with this pork loin recipe. Maybe infatuated is the better term. The rub gives you heat, spice, and a little salt. The apple slaw/salsa/whatever you want to call it adds a little sweet, a little sour, a little cooling effect, and good texture. I could probably eat this for the next several days and not grow tired of it. It’s that complex and well thought out.

That said, I wish I had thought of this myself. Alas, I found it on Pinterest or Google or through some other search engine. Click here for the original recipe.  As usual, I modified a bit. Some due to the fact that the original recipe only calls for 1lb of pork (who buys a pork loin that’s only 1lb?!) and mine was a little over 4, but also to adjust so it wasn’t too spicy and my kids could still eat it.

The adjustments I made are below:

THE RUB
Instead of TEASPOON measurements, I used TABLESPOON, plus a little more. I’d say maybe half a tablespoon more than what it called for.
I did not have pimenton, so I used regular old paprika. (Thank goodness, I thought, a mild seasoning!)

THE TRIMMING
I did trim the loin lengthwise, removing a piece of fat that ran the whole length of the pork. But I left the rest of the little bits on for some extra flavor!

THE SALSA
I did not measure anything. I diced one average size Granny Smith, used the juice from one large lime, peeled a little of the peel off, approximated the cilantro, and substituted about 1/8cup applesauce for apple juice (only because I forgot juice at the store – but to our benefit. I think it would’ve been too watery with juice). The only thing that was exact was the jalapeno. I had exactly 1 half left from guacamole I made last week. I finely diced it though (don’t think the kids would appreciate strips of jalapeno!).

THE COOKING
I’m sure this is great on an outdoor grill, but when I made this last night it was 16º during the day time. I wasn’t about to shovel my deck and stand in the freezing cold. So I cut the loin into fourths before I rubbed it, pulled out the grill pan, smoked my best friend out of my house, and finished it in the oven. I would say 6 minutes on each side is pretty accurate. Maybe a few more. You want it still soft and springy in the middle. Then cook it for about 30 minutes at 375º. Slice and spoon the salsa over top. I served it with broccoli and some Parmesan noodles, but Spanish rice would’ve been the perfect compliment. 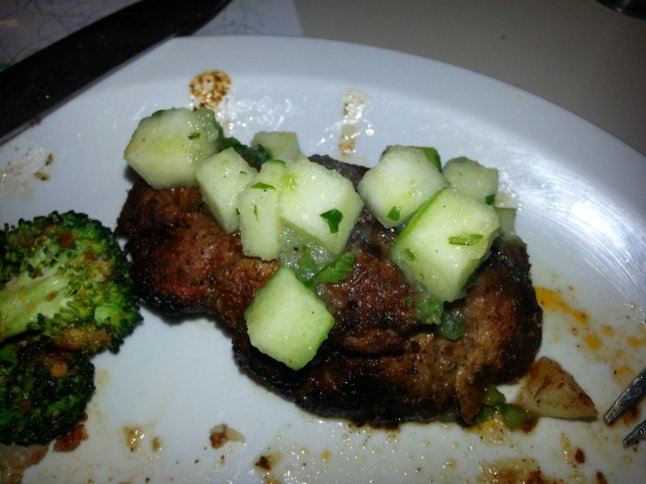 DELICIOUS!!! And the leftovers are perfect to use in my “MINEZOLE” soup. (Recipe to follow, stay tuned!)

Bonus: I discovered that apparently this slaw is the only way my 17mos old will eat the WHOLE apple- not spitting it out after she sucks the juice out. Score!

I'd love to hear what you think! Cancel reply

Happy New Year! This is what we're diffusing tonight!! We're having some friends over, cooking up some fun finger foods, let the kids play some Nintendo Switch, and hopefully have some great conversation 🤩 How are you celebrating?! #HappyNewYear #NewYearsEve #NaturalMama #NaturalHome #EssentialOils
Kids and babies and pies, oh my! My 3 pies: 1. Chocolate peppermint pie 2. Chocolate covered strawberry pie (#THM) 3. Pumpkin silk cream pie (#THM) #PieNight2019
Raise your hand if you're Irish 🙋‍♀️ then share your favorite diffuser blend! This one is perfect for that Springtime feel! (Is there a such thing as Spring fever? Because I definitely have that.) 🌤🌦 . #stpatricksday #stpattysday #diffuser #EssentialOils #doterra #smellsgood #yum #fresh #natural #momlife #home #WAHM #spring #workingmom #workingmama
The #1 reason to have kids: fun little people to have a cool sing along with in the car 🤩😎🎶🎵🎤🎛 #pitchperfect
Follow Meals, Deals, & 31 Thrills on WordPress.com